ROWLETT, TEXAS, JULY 21, 2017 – NavWorx, Inc. announced today the company will be broadcasting the installations of two ADS-B projects Live on Facebook during AirVenture Oshkosh 2017. The NavWorx ADS600-B is a line of remote mounted Universal Access Transceivers (UAT), delivering 2020 compliant and certified ADS-B Out (transmit) and ADS-B In (receive) for installation in general aviation (GA) aircraft.

In a first for the GA segment, Facebook Live will be used to engage followers in conversation during an actual ADS-B installation. The announcement is also timely. With the 2020 deadline looming, the requirement for ADS-B equipage is at the forefront of conversations with pilots, aircraft owners and operators, and service providers everywhere.

“Facebook Live is an excellent platform for showing aircraft operators the steps involved in ADS-B equipage,” said Bill Moffitt, president of NavWorx. “These live broadcasts will allow others to interact in real time as the work progresses with the installation of NavWorx ADS600-B systems on two certified Cessna aircraft. As followers post questions, all participants will see the discussions, and can check out live reactions. This hands-on live demonstration will be a great way to inform what’s involved in installing ADS-B in an aircraft.”

NavWorx offers ADS-B compliance solutions for certified and experimental aircraft at an attractive and affordable price. With its ADS600-B UAT, TransMonSPE, ARINC 429 interface, and Wi-Fi adapter, NavWorx has solutions for every aircraft to help operators realize the full benefits of ADS-B.

The Super Legend XP (eXtra Performance) is now available as an E-LSA or EAB. Enhancement modifications include square wing tips, extended flaps and ailerons, 40-gallons-usable fuel tanks, and more. Stunning slow speed characteristics, higher top speed, and greater control authority are the result of the wing modifications. Extra fuel capacity allows for longer roundtrip/backcountry flights without a fuel stop. But that’s just the beginning of what the Super Legend XP has to offer.

The Super Legend XP also offers more in its undercarriage. A custom-made cabane vee is the perfect match for bigger engines and tundra tires. An extended landing gear puts the wheels three inches forward and adds three inches in height. The results are increased angle of attack for better takeoff performance and improved braking with heavier engines.

A range of tundra tires—sized from 8.50 to 31 inches—is matched with Grove wheel/brakes on the Super Legend XP. Plus, there’s a choice of heel or toe brakes. A new T3 Tailwheel Suspension System replaces the customary static leaf spring with a dynamic coil spring. With shock absorption that’s neither abrupt nor too yielding, the T3’s coil over shock is tuned to provide impact cushioning and limit rebounding. The T3 works with Scott and ABI baby bushwheels.

Further modifications include L-21 style extended rear windows and a skylight, affording pilots nearly 360-degree viewing. Their full effects are observed during low-and-slow surveillance and reconnaissance operations. Safety and ground operations are also enhanced by the increased visibility. A second fuselage enhancement is an extended baggage area, allowing transport of lengthy and bulky gear in the tail of the aircraft. Weight reduction throughout the Legend Cub lineup has also contributed to performance enhancements.

With its Super Legend, American Legend Aircraft Company brought high performance engines to the Cub platform. The Super Legend with a 115-hp Lycoming O-233 increased the aircraft’s power-to-weight ratio to the equivalent of a 150-hp Piper Super Cub. Adding a Titan engine to the Super Legend HP increased power even more.

The Super Legend XP with Titan engine is now available in a dual fuel configuration, for operation on mogas or avgas. Switch-selectable, the engine timing is tuned to either fuel grade, while a surplus of power remains available on both. A new, optimized Catto propeller performs extremely well on takeoff. Its fixed pitch also cruises well without over-revving the motor.

According to launch customer Joe Edwards, “The XP is the best of all worlds. It cruises more comfortably and it performs short takeoffs and landings with the best them. My XP stalls at 8 MPH less, at approximately 25 MPH, with its longer flaps.

“There’s a cosmetic benefit too. The XP looks bigger, larger, and heavier. More importantly, the performance goals we achieved met all my expectations.” Other accomplished pilots who favor the Legend Cub are well-known performers such as Bruce Bohannon, Frank Knapp, and Greg Koontz.

American Legend Aircraft Company continues to be one of the most successful manufacturers of sport and recreational aircraft, and is noted for its exceptional product support. American Legend is renowned for building a true Cub, one that is sensibly modern, competitively priced, and built to last.

For further information on the Legend Cub, contact American Legend Aircraft Company at 1810 Piper Lane, Sulphur Springs, Texas 75482; call 903-885-7000, or log on to www.legend.aero. Follow us on facebook.com/LegendAircraft and instagram.com/legendcub. 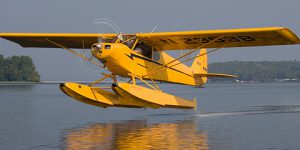 Originally published in In Flight USA magazine… Simply AERO, the European event that is all about general aviation manifest its 25th anniversary from April 5–8, 2017. AERO hosted 700+ exhibits of airplanes, and then some. The trade show is a well established, essential stopover for aviators.

While AERO is billed as “The Global Show for General Aviation,” a more apt description in 2017 might have been “The European Show for General Aviation.” Because while European aviators were gathered for AERO at Bodensee-Airport in Friedrichshafen, Germany, many of their counterparts from around the globe, and particularly in the U.S., were taking part in similar exercises at Sun ‘n Fun on Lakeland Linder Airport in Florida. Though AERO remains the grandest of its kind across the Atlantic…