A Bearhawk Patrol, VH-TUC, made its first flight in Perth Australia last month. This aircraft joins two other Patrols currently flying in Australia. “Another in Perth was built from a Quick-Build kit. There is also scratch-built Patrol flying in New South Wales, Australia,” according to Mark Goldberg, president of AviPro who manufactures Bearhawk kits. VH-TUC is powered by a Mazda rotary engine.


Show Press Release (712 More Words)
“The latest Perth Patrol was built from our Quick-Build kit,” Goldberg added. “One of the builders had many years’ experience racing Mazda rotary powered cars, so they went with the Mazda rotary engine and an IVOPROP propeller.”

Alan Arthur of the Patrol builders’ threesome in Perth, told of the story behind the VH-TUC registration and its Lucy In The Sky With Diamonds name: “Narrogin Gliding Club (of south west Western Australia) has a Piper Pawnee tow plane with the registration VH-TUG [as in tugboat / tow plane]. When it came time to pick a registration TUC was available. So, with no other preferences, other than it is easy to say in the circuit calls, we picked that one. One of the girls in the gliding club that I am associated with came over to look at the aircraft in the early stages of the build. She has a practice of naming everything and said to me, ‘She looks like a Lucy.’ We all said okay, but it has to have a subtitle. Reminded of the Beatles hit Lucy In The Sky With Diamonds, all of the partners agreed.”

The Perth Patrol has an extended exhaust system and it is very effective according to Alan, “All the noise now comes from the prop and gearbox; and not much of that. Mazda Rotary engines have a reputation for being very noisy and it certainly was when we first ran it up with only a small homemade muffler. Desperate action was called for, so I ordered a custom 3-inch racing exhaust system for a Mazda RX-7 from Racing Beat in the U.S.

“The Mazda engine is water cooled with a large radiator each side of the engine and an oil cooler in the top scoop. Rotomotion Engineering of Perth did the engine build and provided lots of advice. It is a bit different than their usual street racer customer.” Target horsepower is 210-240 which the builders are working on by more tuning. The engine spins an IVOPROP 76” Magnum three bladed propeller that is ground adjustable.

“Scott French, the builder in Iowa, built his Patrol mostly from scratch but using finished wing spars and ribs ordered through AviPro,” informed Goldberg. “Scott had previously finished a plans-built Storch replica which he described as a difficult build in comparison. He flies off his 1500-foot grass strip.”

Bruce McElhoe won best homebuilt at the recent Blakesburg Fly-in for his Bearhawk LSA. Bruce’s Bearhawk LSA was the first customer-built aircraft of the Bob Barrow’s design. En route to Iowa, Bruce stopped at Mark Goldberg’s Texas ranch/strip. “I built my Bearhawk LSA from an AviPro kit. I covered the fuselage with Poly-Fiber, and installed a new Continental O-200A,” stated Bruce. “With paint on my clothes, skinned knuckles and a big grin, I finished the job in three and one-half years. Empty weight was a satisfying 821 pounds.

“After 50 hours of flying locally, I decided to try a 5,000-mile trip from California to the Midwest. My favorite fly-in is the Antique Airplane Association event in Blakesburg, Iowa. In addition to antiques, they welcome homebuilts, especially the old-time high-wing style of the Bearhawk. Apparently, the members judging liked my airplane and awarded a trophy for Grand Champion Homebuilt. The Bearhawk performed and handled wonderfully. Average speed was 110 mph. Fuel burn was six GPH. Of course, I could have reduced my fuel burn by flying slower, but chose not to. I especially enjoyed landing on grass runways. We have so few of them in California.”

For more information on Bearhawk Aircraft, visit www.bearhawkaircraft.com  or call 1-877-528-4776. 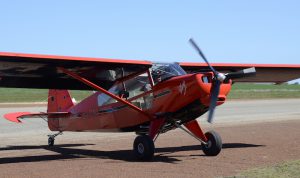 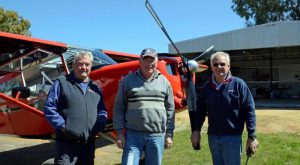 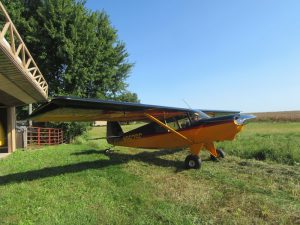 Scott French of Iowa in his homebuilt Bearhawk Patrol. 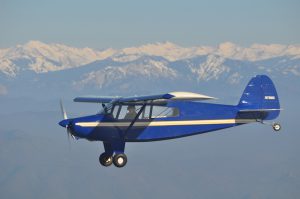 Bruce McElhoe flying the Sierra Nevada range in the area of Sequoia National Park. McElhoe lives at the base of those “hills.”