From bare-bones to something else, the Legend Cub goes high-tech
By Plane & Pilot Magazine

The Piper Cub has been around for a long time, and the classic Cub remains in our minds a dirt-simple machine, though popular Cub offshoots from [others] have upped the ante considerably. So going all in on this game is American Legend Aircraft, the company that makes the Legend Cub, a popular Cub clone. The company’s Cub is going upscale. 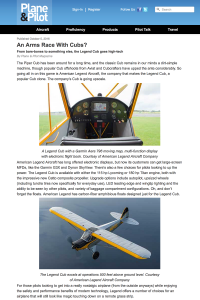 American Legend Aircraft has long offered electronic displays, but now its customers can get large-screen MFDs, like the Garmin G3X and Dynon SkyView. There’s also a few choices for pilots looking to up the power. The Legend Cub is available with either the 115 hp Lycoming or 180 hp Titan engine, both with the impressive new Catto composite propeller. Upgrade options include autopilot, upsized wheels (including tundra tires now specifically for everyday use), LED leading edge and wingtip lighting and the ability to be seen by other pilots, and variety of baggage compartment configurations. Oh, and don’t forget the floats. American Legend has carbon-fiber amphibious floats designed just for the Legend Cub.

For those pilots looking to get into a really nostalgic airplane (from the outside anyways) while enjoying the safety and performance benefits of modern technology, Legend offers a number of choices for an airplane that will still look like magic touching down on a remote grass strip.