The world’s only flying collection of WWII liaison aircraft is once again whole following the acquisition of an Aeronca L-3 by Alamo Liaison Squadron.

Alamo Liaison Squadron (ALS) has completed its ensemble of L-birds with the recent acquisition of an Aeronca L-3 Defender. Based at Cannon Field in San Antonio, Texas—also known as Military City USA—ALS is home to the only collection of actively flying World War Two liaison aircraft, including L-2, L-3, L-4, L-5 and L-6 models.

Liaison aircraft of WWII, commonly referred to as L-birds, were slight in stature compared to other “warbirds,” yet they often performed critical duties on the battlefield. L-birds were called to action in artillery observation and reconnaissance; officer, parcel and message transport; among others, in support of frontline troops. While small in size, the accomplishments of L-birds were immense and the roles they played were as critical to the successes of Allied Forces as any mechanized means of combat.

The restored L-birds of ALS, at the time known as Alamo Liaison Group (ALG), were owned by both the organization and the individual members. In succeeding years, members have rotated in and out, and a variety of aircraft have called Cannon Field home. Presently, the group is proud to say the L-bird ensemble is whole again. One notable exception is the rare, and complex, L-1. The original L-1 restored by ALG is under new ownership. Early in WWII, larger L-1 series aircraft were replaced by the succeeding five L-bird models which served to define the liaison class in vast numbers.

Brought to the attention of ALS by member Chris Hiatt, a self-proclaimed “Aeronca guy,” the L-3 was offered by Jim Bilyeu from whom Hiatt had previously purchased an Aeronca Chief (The Aeronca Chief was a family of high-winged light touring aircraft built in the U.S. from 1936 to 1949. Following some thorough maintenance and updating of his Chief, Hiatt has since accumulated 100 hours on the 2-seat taildragger, an Aeronca 11AC originally built in 1947, and based at Cannon Field.). For many months Hiatt’s Chief served as a stand-in for an Aeronca L-3 in the ALS collection.

The newly acquired L-3 is five years the Chief’s senior. Built in 1942, it once had the military designation O-58B. This “observation” class of aircraft were redesignated liaison aircraft later that year, following the military’s adoption of new tactical guidelines for aerial reconnaissance. The B models in the O-58 series had their canopy modified and additional radio equipment installed. Some 875 examples of the O-58B / L-3B were constructed along with other variations bringing the total of Aeronca L-3 aircraft built to around 1,490.

Derived from the Aeronca Model 65 Defender—a high-wing tandem seat military trainer—the L-3 avails a long line of predecessors including pre-war Chief models. The L-3 could operate from small hastily-built flying fields. It was used mainly for training liaison pilots before they moved on to frontline aircraft like the Piper L-4 or the Stinson L-5. During World War II, the L-3 did see some action in artillery fire direction, courier service, and other frontline liaison activities.

Due to the company’s limited manufacturing capacity, the L-3 was produced in smaller quantities for the military than the roughly 20,000 L-4s Piper built. Nevertheless, the L-3 and the Aeronca family of aircraft are highly praised aircraft. They topped the list in a recent Sport Aviation magazine (Feb 2019) article, “10 Best Buys in Classic and Contemporary Aircraft,” by Budd Davisson:

Aeronca is a proud name that goes back to what could be considered the first light general aviation airplane, the Aeronca C-2/C-3 series. After World War II, [the company] produced one of the more iconic airplanes of the period, the 7-series Champ. Champs have always languished in the shadow of the iconic J-3 Cub. All things being equal, Champ prices still lag well behind the Cub… [despite] the design goal of Aeronca to produce an airplane that addressed every shortcoming of the Cub (it’s wider, you solo up front, excellent visibility, etc.).

Today’s Cubs, and the Champ’s offspring Citabria, have improved on these points, in addition to equipping with more horsepower and often sophisticated electronics. Nevertheless, the demand for true warbirds in their “vintage” state remains strong. There is a strong correlation between L-birds and the modern “taildragger.” Both perform equally well, on the remote battlefields of the past and the alluring backcountry of the present.

ALS’s newly acquired L-3, O­-58B s/n 2082, was described by its previous owner, Jim Bilyeu: “Thought some of your bunch would like a real WWII bird.” He added, “Contributing factors to offering her for sale are creaky bones and expanding waistline that make in/out access to the cockpit exceedingly difficult.

“The Army Air Corps original paper work seems to be there except for a DD 214 [Certificate of Release or Discharge from Active Duty issued by the United States Department of Defense]. Maybe because it went to the CAP [Civil Air Patrol], it wasn’t considered discharged.

“It is in civilian livery [tan and orange, as purchased], but fabric tests good and painting would be ok. For full effect, the greenhouse (Greenhouse refers to an area of the fuselage covered with windows. In the case of L-birds, extended rear windows and an overhead window improved visibility for the rear seated passenger whose function was to observe ground activities and spot enemy pursuits in time for the pilot to take evasive maneuvers.) could be reinstalled. I put the 85-­8 [85 hp Continental engine] (675 hrs since overhaul) from the 11CC [Aeronca Super Chief] on with Wagner STC [FAA Supplemental Type Certificate no. SA7NW]. It really perked the little bug up. Spins, steep banks, etc. are smooth. I have a friend who takes it up nearly every weekend. Flies an hour or so. Using 100LL and getting 4–5 [gal/]per hour.”

Following the L-3’s arrival at Cannon Field, ALS President and its ferry pilot, Gene Jensen informed, “We recently purchased an Aeronca L­-3B originally known as an O-­58B, more recently restored and hiding in civilian attire as an early model Champ. The aircraft is currently airworthy and made the trip from NW Dallas to Cannon Field in four hours flight time with a fuel stop in Cameron, TX. This aircraft is in original configuration which means that it does not have an electrical system and requires hand propping to start. Come see the new member of the ALG lineup and help with plans to return it to basic L-­3B paint scheme.”

The L-3 has been thoroughly inspected and confirmed to be in airworthy condition. It has subsequently been flown by various members of ALS. For its gentle and responsive handling characteristics, the L-3 is quickly becoming a favorite among members. Further review detected minor metal fatigue in the seat structure, and repairs were deemed necessary. In the process an adjustable seat was developed to allow for longer-legged pilots. Wear was also found, and addressed, in the exhaust system and carburetor. 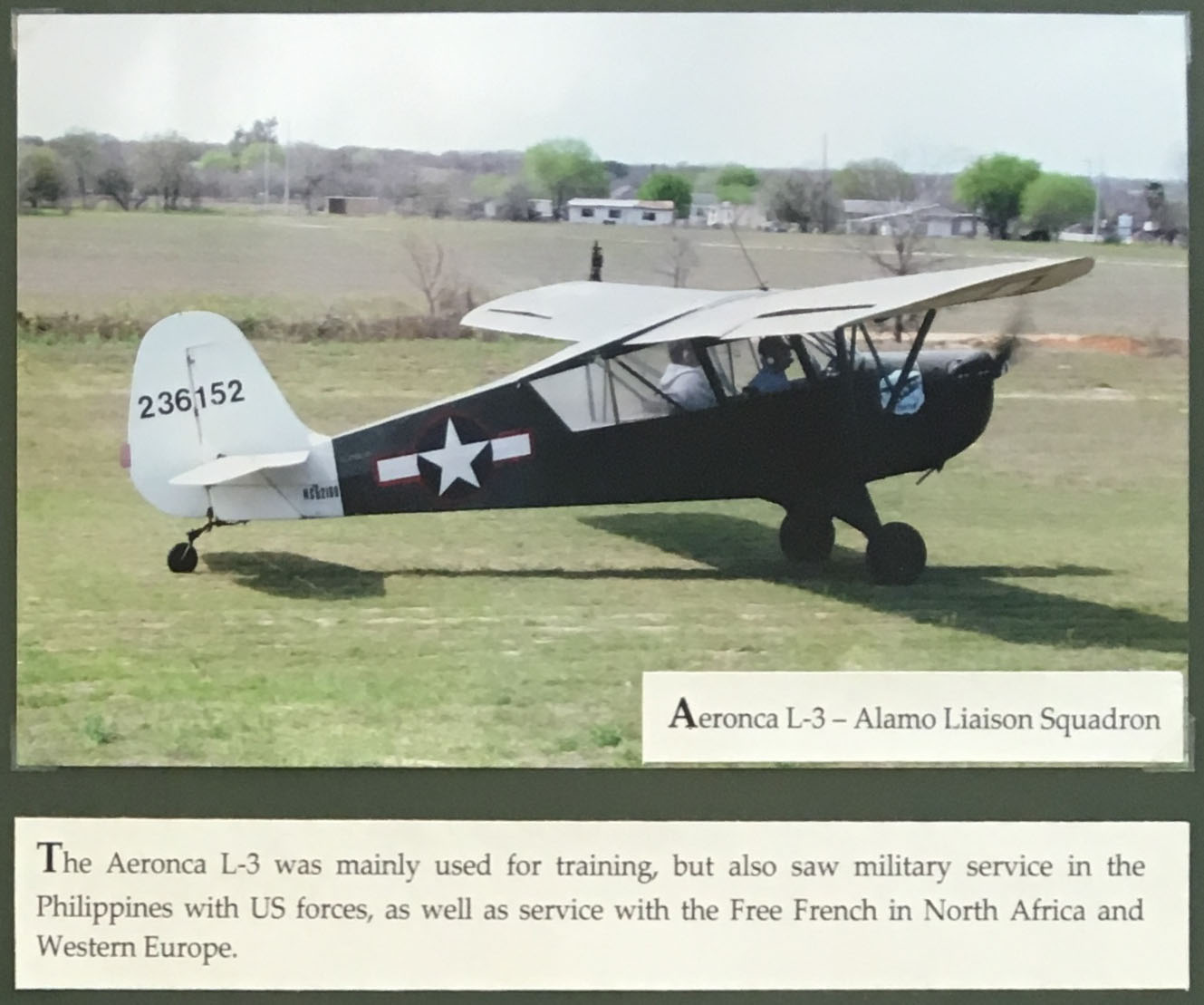 ALS seeks to perpetuate, in the memory and hearts of the American people, the spirit with which the liaison pilots, their crews and the airplanes served in the defense of not one, but many nations. To help punctuate these contributions, the ALS mission is to bring people together and thereby foster an interest in aviation and its history. Many of the organization’s activities offer an opportunity to increase awareness, bolster membership and grow support. In this way, veteran liaison pilots, along with those who built and supported the L-birds, can be remembered for their daring feats so often displayed yet seldom recorded.

As a 501c3 non-profit organization all funding is derived from member dues, reimbursement for flying expenses, and contributions. All member activities are performed on a volunteer basis, so all funding goes directly to support the aircraft and their upkeep. We encourage you to join ALS with an annual contribution, a one-time contribution, or donation. All enthusiasts are welcome to tour the facility at no cost. Demo flights can also be arranged.